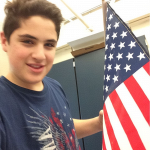 Hi everyone! My name is Alex Kawa, I'm 17 years old, and I'm from Connecticut. The first time I ever watched The Loud House was in August 2016. I was at my grandma's house in New Jersey, as I had been called there for a family emergency just as my dad and I had gotten back from a two-week trip to California with my Boy Scout troop. Bored, I just sat in the living room watching TV, and Nickelodeon was on, specifically, The Loud House. The first episode I watched was Cover Girls, and while I don't remember watching the whole thing, I remember it being fairly decent. Then, A Novel Idea came on next, and I really liked it. I was kind of surprised when I found out that this show was only three months old at the time, given that it was good, something I can't really say about a modern Nickelodeon cartoon.

After that, I put the show on the back burner and didn't think too much about it or watch it much, until almost a year later, in July 2017. I was in Delaware, visiting my other grandma, and as I was getting ready to leave the hotel I was staying at, I saw the TV was turned on to The Loud House. It was the ending of For Bros About to Rock, and, given my love for rock and metal, I enjoyed it.

Finally, in September 2017, as I was surfing YouTube, I saw a live video of season 1 episodes on loop. With nothing better to watch, I checked it out, and was hooked. That's when my love for the show began. Tricked! was the first new episode I caught, which might somewhat explain why it's since become my all-time favorite Loud House episode.

I don't really know what got me hooked on The Loud House, especially given that I was 15 when I first got into it, and I had never really been the biggest cartoon fan. I guess your morbid curiosity can sometimes open you to new experiences.

Overall, I have thoroughly enjoyed The Loud House since I first saw it. While it's had it's fair share of bad and even awful episodes, it's remained solid overall. It's taken several risks, many of which have paid off, the characters, even some of my least favorites, are likable and relatable, and there are usually enough funny jokes to carry an episode.

Retrieved from "https://theloudhouse.fandom.com/wiki/User:AlexKawa?oldid=929737"
Community content is available under CC-BY-SA unless otherwise noted.