Drift Loud is the main character of "Drift's Bizarre Adventure" and "Cesco: Son Of Orion"

At 16 years old (14 years old before the final events of Season 2 in DBA) Drift is the teenager boy who loves within his family, the Louds. He attends 7th grade at Royal Woods High School.

As in revealed in Episode 7 "Forgotten Gems" in Cesco: Son of Orion, Drift was the last gem alive before Garnet, Amethyst, Pearl and the other gems are going in extinction by the hands of Future Cesco.

Steven gave his gem before he dies, and he hides in the shadows before the robots find him, he escapes trough a "Rift" to go into Valhalla

Drift is a good-hearted person, who always looking for some battles. Drift is also a gamer in Episode 11 "Bun Trouble". His favorite games is Fortnite, Super Smash Bros. Ultimate and Minecraft. His favorite band is iKON, BTS, Major Lazer and Marshmello.

Minigun: The first weapon of Drift, The Minigun is technically an Assault Rifle, although it behaves differently to the other weapons in its category. The key elements of the Minigun, are that it has no magazine limit, fires much faster than other Assault Rifles, and has a cool-down period if fired for too long.

Assault Rifle (FN SCAR-H): Drift's third weapon, The Assault Rifle is a fully automatic, fast firing, medium ranged weapon, which excels at medium ranged combat, but has the ability to perform decently at short and long ranges. It has a headshot multiplier of 1.5x, is hitscan and is a good all round weapon for any engagement.

Dual Edge: Being a remix of the Rift Edge harvesting tool, Drift's Dual Edge is perfectly designed to by wielded as blades harnessing inter-dimensional energy.

Rift's Edge: Similar to Dual Edge, his pickaxe is perfectly designed by the rifts.

Atmosphere: Drift's Back Bling appears to be some smooth, supernatural golden blades with a purple electric orb with particles in the centre. 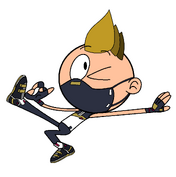 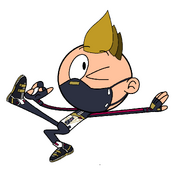 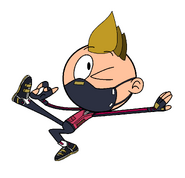 Retrieved from "https://theloudhouse.fandom.com/wiki/User:DriftLoud?oldid=1075700"
Community content is available under CC-BY-SA unless otherwise noted.